Benefits of our Top Tier All American Kicking Camp 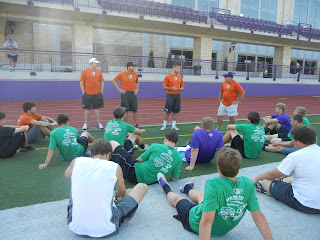 This camp is open to Kickers, Punters, Long Snappers, and Punt & Kick Returners.  Our two camps will be 2 days of Instruction, Drill Work and Evaluation. 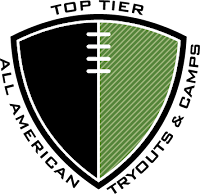 Our morning sessions will be player evaluations for Kickers, Punters, Long Snappers and Punt & Kick Returners.
Our afternoon sessions will include instruction, drill work, competition and great seminars. 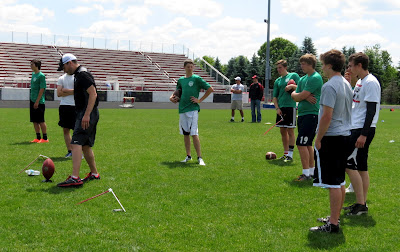 The Evaluations are for High School Athletes, so interested College and Middle School Specialists should register for the Afternoon "Instruction Only" sections of the camp.


This will be a great camp and opportunity for you to showcase your abilities, but also improve individually for your upcoming season. 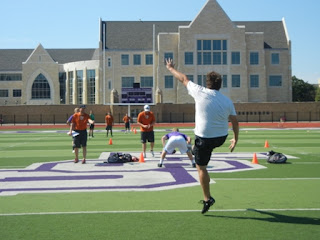 The Camp will be run by Tom Feely (Feely Athletics), Chris Husby (Special Teams Football Academy) & Mike Stock (ChampionshipSpecialTeams.com & Former 18 year NFL Special Teams Coach).  This camp will also include some of the area's best instructors.  It's a camp you won't want to miss! 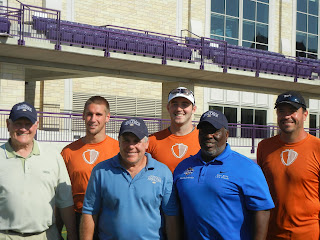 
All participants of our morning sessions will be run through the National Camp Series KIX charting system.  All participants will receive a bio and chart showing how you did on the NCS website. 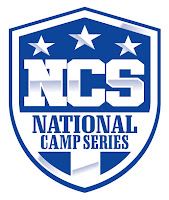 This camp is for specialists of ALL Skill Levels.  You don't have to be the BEST to attend.  Our highly trained staff will train even the Beginner & Intermediate level Kickers, Punters, Long Snappers and Returners.


Athletes that chart very well will have the opportunity to be listed on the
Top Tier All American Watch List for Specialists.  There will be a Watch List for all 4 High School Classes: Freshmen, Sophomores, Juniors and Seniors.  If your child qualifies for the Watch List, we'll be highly promoting these students to colleges of all levels.  During the football season, we'll track game stats, and at the end of the year announce of Top Tier All American Finalists.  It's a great opportunity for collegiate exposure for High School Athletes.  Read more about our Philosophy. 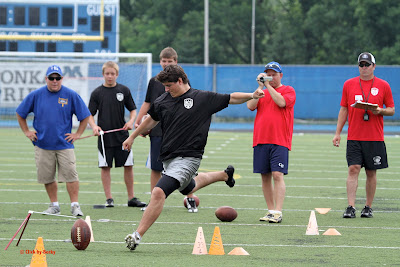 How does one register: Top Tier: Register Now!

Camp Locations:
Mike Stock will also be running a Coaches Clinic on Special Teams for any interested Football Coaches or Parents that want to learn more about Special Teams.

-Coach Husby & Feely
Posted by Special Teams Football Academy at 12:31 AM No comments:

How The Top Tier Kicking Camp Works & Why It Is Different

Not only will you have the chance to compete to earn a chance to become an All American, you’ll attend a top notch kicking, punting, snapping and returners camp run by some of the top instructors in the area. 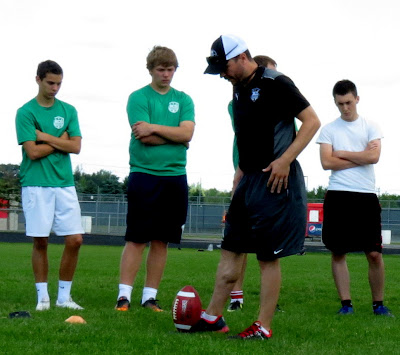 This is an All American Watch List created by Specialists, for Specialists.

How is this different and better?
The participants are not competing against the others at the camp. Pre-determined standards known as “All American Benchmarks” must be met by the athlete during the 2 day camp in order to make the “Watch List”. The All American Watch List (separate lists for each graduating class) will be sent to newspapers and colleges around the country.
Those making the watch list will be listed in “Coaches Connections”, a web site for athletes connecting with college coaches, and their season stats will be updated throughout the season. The final Top Tier  “All American Team” will be announced in early January of 2013. 2012 season stats will be the only criteria used for the final All American Team. The Special Teams All American Team will be recognized for this prestigious honor through sports news media outlets. 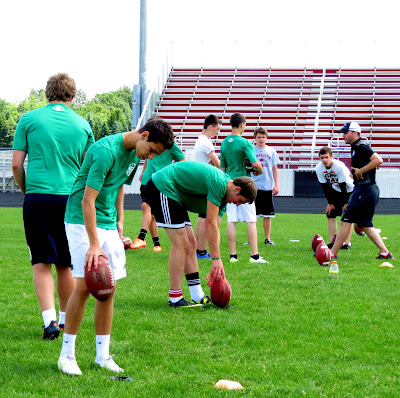 Who may participate?
* Any “rising” 9th, 10th 11th or 12th grader.
* College Athletes and Free Agents may attend our “Camp Only” portion of the camp.
* Athletes of All Skill levels.


How does one register: Top Tier: Register Now!

Or...go to FeelyAthletics.com or SpecialTeamsFootballAcademy.com and click on the “Register for Top Tier All American Tryouts and Camp”

Lodging: Lodging available for participants at the dorms of University of St. Thomas or local hotels.* Special discounted rates for rooms if booked by June 15th, 2012.

Our Philosophy:
We believe every football player should have a chance to be considered for an “All American” status. We are providing every Special Team specialists (Kickers, Punters, Long Snappers, and Kick Off/Punt Returners) the opportunity to prove they deserve the chance of a possible All American Honors. 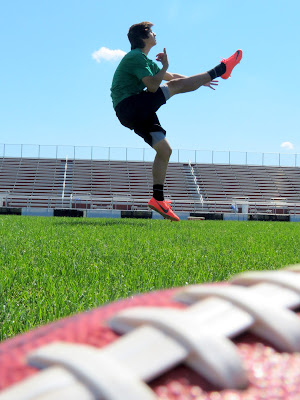 How the Tryout works: (click here for camp schedule).

We will conduct a  thorough an NFL style evaluation where you can be tested on Field Goals, Kickoffs, Punts, Long Snaps or your abilities as a kickoff/punt returner.  The NFL style system was developed by Former NFL kicker Michael Husted, who runs the Annual NFL Free Ageny Pro Scout Combine and National Camp Series.

Each High School Class: Freshman, Sophomore, Junior and Senior will have a set criteria that you must meet to be listed on the All American “Watch List” as you enter your upcoming football season.  Every athlete will go though a thorough evaluation assessment of the participants’ skills that will result in being listed as a highly publicized “Watch List” of Special Teams All American candidates.

If you qualify for the “Watch List” we will be tracking your game by game statistics into our public database Watch List, that College Recruiters and Coaches will have access to see.  This can be a great opportunity to be seen by many top programs.  At the end of the year, the top specialist from each class will be named to the EXCLUSIVE Top Tier “All American” list.  The watch list and finalist list will be emailed and sent to all the Division 1, 2, 3 & NAIA programs throughout the United States. 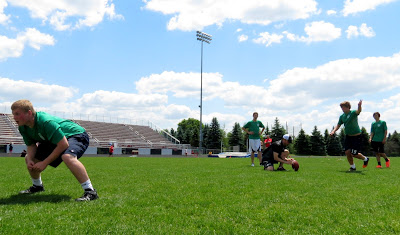 This Camp is for EVERYBODY regardless of skill set:
Regardless of if you qualify for the “All American Watch List” or not, or feel like you don’t have the skill set to qualify, your results will be entered into the National Camp Series website and database.  You will receive a profile, bio and your kicking chart showcasing your abilities and you’ll be rated using the KIX rating system to show how you rank amongst your peers.   This can be used to send to college coaches to show your abilities regardless of if you make the “All American Watch List.”

Tweet
Top Tier All American Tryouts & Kicking Camps will be running a 2 day Coaches Clinic on Special Teams.  Coaches of all levels are invited to attend. 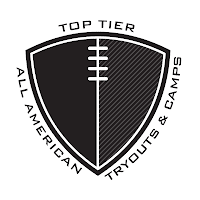 
Information about the camp: www.TopTierAllAmerican.com

Following his instruction of each phase, he'll have video to further reinforce the initial teaching principles.  As we complete each component, we'll also include drills (as they pertain to each individually) to help emphasize the details which should further aid you to gain success in each of the areas that will be covered.  The clinics will also be open to discuss all aspects of Special Teams.


We are enthusiastically looking forward to your enrolling in this Special Teams Clinic!
Top Tier: Register Now!

For more Information on the Coaches Clinic, Click Here.

There are a number for fun activities for you to do while in St Paul/Minneapolis and Tampa.  You will definitely enjoy your weekend stay.

Coach Mike Stock will be Running a 2 day (morning sessions) Coaches Clinic on Special Teams and Instructing the Kick and Punt Returners at the Top Tier All American Camps on July 7th & 8th in St Paul, MN and July 28th & 29th in Tampa, FL. For more information on the Coaches Clinic, Click Here.

Posted by Special Teams Football Academy at 2:03 PM No comments:

Tweet
Chris Husby is the other bookend of running the Top Tier All American Tryout & Kicking Camp.  Here is alittle more about Coach Husby.

Coach Husby owns and runs Special Teams Football Academy.  He is a Professional Kicking, Punting and Snapping instructor and a former NFL Free Agent Punter of 6 years.  He trains athletes that span from the Midwest, Canada and various international countries.  He has brought together some of the top experts in the Midwest to help athletes reach their highest potential.  All instructors are former kickers, punters, snappers who have competed at the highest level of Football as an NFL kicker/punter, Free Agent, or succeeded at the Collegiate level. 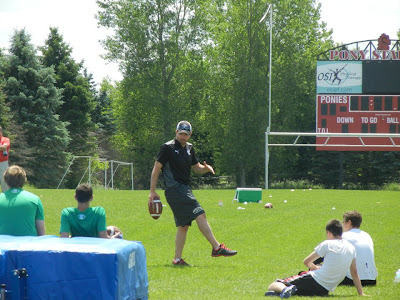 He holds one on one lessons, small group lessons, mini camps, Special Teams camps, and National Camp Series evaluations and camps for kickers, punters & snappers.  He also helps mentor the athletes to be good student athletes and teach them how to focus on the mental aspects of punting, kicking and snapping, as well as try to help them get into college to play football.

He is a member of National Camp Series and its prestigious network of kicking coaches.  He is also a Special Teams Analyst & Columnist for MinnesotaPreps.com (The MN Site for Rivals.com!)
Testimonials 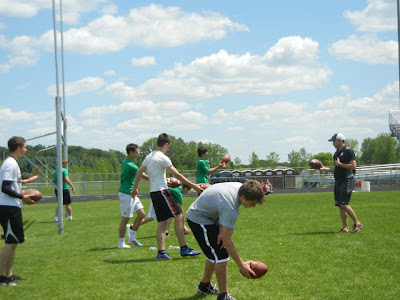 If you have any questions or would like to request information on camps & lessons, please contact Chris at CoachHusby@gmail.com

Posted by Special Teams Football Academy at 10:04 AM No comments:

Tweet
Tom began his career teaching and coaching in Minnesota in 1974. After his first two seasons as a varsity high school football coach he already had back to back state championships on his coaching resume.

Tom studied Sports Psychology under the famous Dr. Robert Singer and Dr David Pargman while pursuing his Doctorate in the field of Sports Psychology. Tom focused his research on the power of mental imagery and factors producing “mental toughness”.

In January of 2007, Tom Feely earned National Board Certification.

He is the only Nationally Board Certified Teacher working in the kicking coaching industry.
Tom began his specialty as a kicking coach in 1992 when his oldest son, Jay Feely, was 14 and became interested in becoming a kicker in high school. Jay is currently in his 12th year as an NFL kicker, currently with the Arizona Cardinals.

To date, ten of Tom Feely's students have made it all the way to the professional level of football, many playing in the NFL.

Tom and his sons, Jay, John, Ryan, Tyler and Nick are all very instrumental in our mission to spread to the athletes we are privileged to encounter, not only the skills of football kicking and punting, but more importantly, the attitudes and values that help make young people become successful at whatever they dream to accomplish. Tom’s rich background as a teacher, passionately shares with his protégées.

The Feely Family Foundation and the World Ministries Football Club are two examples of the commitment this family has to making this a better world.